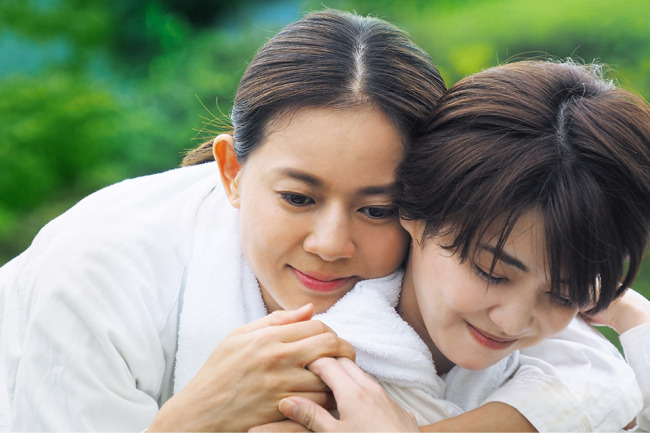 The setting is a beautiful rural town in the mountains with its clear blue sky and the lush greenery. Misaki works at a local school nursery while living and caring for her elderly handicapped mother. Although she graduated from college in Tokyo, she couldn't find the job she wanted, and despite romance in her life, she finds herself age 40 and single. She dreams of marrying Naoki, who visits her home as a helper for her mother, Mitsuko. Suffocating in the stifling daily life spent with her abusive mother, she meets with Naoki, and spends time with her childhood friend Kaori, who lives locally as a beekeeper. However, Misaki finds herself betrayed by Naoki, and after Kaori's sudden death, her heart is on the verge of collapse. In an era in which COVID-19 has pulled people apart, what becomes of our hearts? A spoonful of honey will help connect the hearts of the “women”.

It is the first time in nearly 25 years that Kazuyoshi Okuyama, examines the lives of women on the edge. The release also marks the 25th anniversary of the establishment of Team Okuyama.

Misaki is played by Yukiko Shinohara, who has previously appeared in topical works such as "The Voice of Sin" (2020) and was selected as a regular cast in the popular serial drama series "Aibou: Season 19". Her movie "Odayaka" (2012) also has a connection after being highly evaluated at the Creator’s Factory of the Okinawa International Movie Festival, where Okuyama is the Executive Director. Although her appearance was short, her performance led her to the starring role in "Women," in which she also participated in the script writing.

Kana Kurashina plays the best friend Kaori, whom Misaki relies upon. She was inspired by the script and cut her long hair to 40 centimeters for the role. She also sheds her label as the "bright, cute, pretty woman" that has been with her throughout her long career. Kurashina embodies a sad and lonely woman who is mentally out of balance with reality.

Veteran actress Atsuko Takahata plays Mitsuko, the mother who has lost her purpose to live and become toxic and abusive to her desperate daughter. She worked active care helpers to help create her role and be able to embody Mitsuko's physical symptoms and feelings. The love-hate relationship of the daughter-versus-mother provides some of the most intense scenes of the movie.

Tweets by oimf_official
Back to TOP